Endorsed by Network. Trusted by Security. Empowered by Cloud.

In my last post I pointed out that a growing number of security professionals are overconfident about their ability to handle security threats hidden in SSL and TLS communications.

I mentioned that 85% of security professionals believe their organisations have this issue covered[1], but at the same time only 20% of next-gen firewalls (NGFWs) and unified threat management solutions (UTMs) actually inspect SSL traffic, according to Gartner [2], and that Blue Coat Labs found dramatic increases in malware using SSL in the last two years*.

But I didn’t really explain what’s causing the gap between perception and reality. Let’s take a quick look at some of the myths that persist about SSL traffic as well as the SSL blind spot.

Myth #1: 50% of all malicious attacks will use SSL in 2017. Actually, hackers just love hiding threats in SSL, and the use of SSL for exploits is growing faster than SSL itself. By next year, 2017, more than 50% of network attacks targeting enterprises will use SSL, according to Gartner[2].

Myth #4: The use of SSL/TLS is holding steady. Uh-oh. NSS Labs [3] predicts 20% growth in SSL traffic per year, and corporate adoption of cloud services and mobile apps are expected to accelerate this growth. Customers and partners in every industry segment we support also confirm the pervasiveness of SSL and its rapid growth.

Myth #8: All we have to do is block access to unsavory websites. Most threats actually come from legitimate websites—and many threats penetrate from inside the organisation. You must selectively check both inbound and outbound SSL traffic, not just block access, to ensure secure communications and maintain continuity of operations. 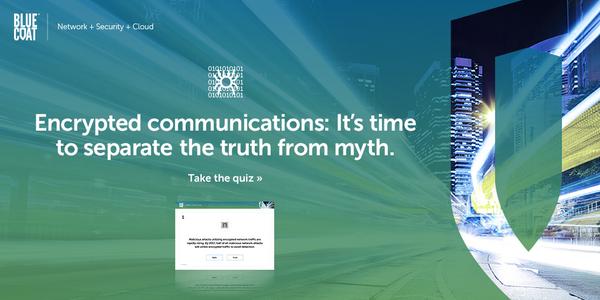 If you’re interested in finding out more about this topic, check out this Top 10 myth busters interactive guide we’ve just put together. In this document, you’ll find a lot of interesting stats and figures that’ll make you think twice about how well you’re dealing with the SSL blind spot.