The efficacy of Anonymous. 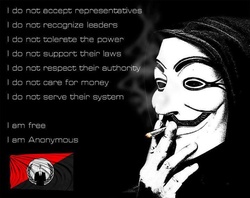 From its humble beginnings on the deep web and 4chan, to mainstream hacktivism surrounding ISIS and government technology infrastructure, cyber security professionals—not to mention common folk as well—are starting to question the intentions and the efficacy of the notorious hacktivist ‘group’ Anonymous.

Having no defined opinion, motivation, reaction or command structure, it can be hard to understand how this loose unit of keyboard warriors has become one of the leading hacktivist groups to grace the Internet.

In 2003, emerging from 4chan image boards, this group escalated and began to draw media attention thanks to its “Project Chanology” attack on Scientology. An unofficial spokesperson deemed Scientology to be a “useless religion.” Using a host of network stress testing tools and DDoS attacks numerous scientology related sites were brought to their knees, cementing Anonymous as a viable threat in the world of cyber security.

By 2015, Anonymous finds itself in a world rife with plausible first-world issues such as the shooting of Michael Brown (which initiated the riots in Ferguson) as well as the Charlie Hebdo attacks (Je Suis Charlie). Such issues are addressed by law enforcement agencies, but when they are not seen to be handled ‘appropriately’, Anonymous has a penchant for involving itself.

Anonymous’ number one creed is its “unrelenting moral stance on issues and rights, regardless of direct provocation”, a creed it applied when it was decided by various members that the Ferguson police were out of line. Anonymous, armed with network stress testing tools and DDoS attacks took down internet and phone lines of Ohio city Hall, essentially crippling the local government for a day.

These hacktivists have been praised for their unwavering sense of morality and commitment to the cause, which I cannot disagree with. The aspect that I call into question is their efficacy. A staunch example occurred during “Operation Ferguson” when an Anonymous splinter group promised to release the identity of the police officer responsible for the shooting of Michael Brown. They proceeded to do so… unsuccessfully. It was confirmed by law enforcement that the name released was incorrect, drawing unsolicited attention and violence to an innocent policeman.

Without a clear command structure, it’s impossible for any organisation to agree and adhere to its goals and approaches, let alone a ‘non-organisation’ operating expressly without structure. It is incidents such as this that draws into serious question the method and also the madness that is Anonymous.