Your users may soon be taking selfies instead of typing passwords 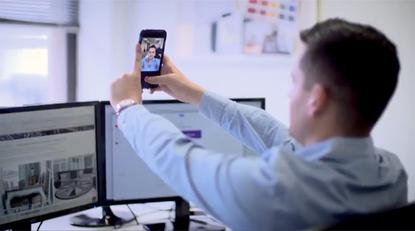 Biometrics is shaping up to be the new authentication as a host of identity and image-scanning innovations set the stage for the use of body scans as a complement to – or even a replacement for – conventional passwords.

Small-loans provider Sail Business Loans took a significant step in the direction of biometrics this week with the launch of an app that allows users to photograph themselves to prove their identities during service login. Intelligent face-finding algorithms can pick out the user’s face from even wide-angle photos, using online APIs to compare the captured face against driver’s license or passport photos that provide confirmed proof of identity.

The technology is seen as establishing a beachhead in the fight against fraudulent loan applications, which are often used to access funds by criminals exploiting stolen identification.

“Too many small businesses think they’re too small to catch the attention of cybercriminals, but unfortunately, that just isn’t true,” Sail Business Loans founder and CEO Yanir Yakutiel said in a statement.

“Implementing these security solutions gives business owners peace of mind that we take their security seriously. It also positions us to offer a quicker, more reliable and more competitive rate because we also have the assurance that everything checks out as soon as the application is submitted.”

Sail’s technology represents the combination of a number of technologies that are, collectively, changing the notion of identity and long-held practices around password management and user identity.

Microsoft, for its part, took a more mainstream step this week with the release of its newly released Authenticator app, which leverages fingerprint scanners –now ubiquitous in mid and high-end smartphones – to confirm a user’s identity when they are logging into Microsoft services.

The launch came as Microsoft this week debuted several biometrics and image-related enhancements to its Microsoft Cognitive Services portfolio at its Microsoft Data Amp event.

Microsoft’s Face API, Computer Vision API, and Content Moderator APIs offer readily-accessible libraries providing intelligent parsing of images, of the type being used within the Sail Business Loans app, that can identify human faces, weight their probable similarity with known or other images, or intelligently describe handwriting, landmarks, or other elements contained within pictures.

Providing such capabilities as cloud services – IBM also weighed in this week with the announcement that machine-vision technology had proven 86 percent accurate in detecting signs of diabetic retinopathy – allows for a much faster pace of innovation as well as providing extensive fodder for machine-learning algorithms designed to improve their recognition accuracy.

That accuracy will be critical to positioning biometrics and image-based solutions as alternatives for passwords, which have proven over and over again to be easily compromised and exchanged in numbers that have – due to the massive scale provided by cloud-based solutions like Twitter, Apple’s iCloud, Gmail, and the like – become commonly measured in the millions.

“AI and machine learning have reached a critical tipping point and will increasingly augment and extend virtually every technology enabled service, thing or application,” the firm’s analysts have predicted while recommending that businesses begin considering appropriate password-free use cases now.

“Creating intelligent systems that learn, adapt and potentially act autonomously rather than simply execute predefined instructions is [the] primary battleground for technology vendors through at least 2020.”