​MasterCard chip and PIN hits 88 percent in US, but merchant support still slim 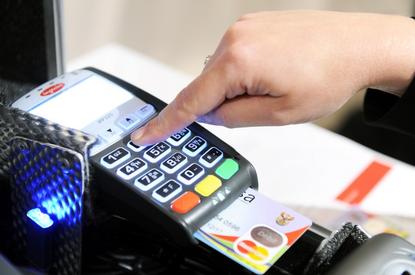 New data from MasterCard shows that nearly all its cards in the US have chips to enable PIN-based in-store purchases, but the majority of merchants don’t support them.

MasterCard on Monday claimed chip and PIN technology is gaining momentum in the US with 88 percent of US MasterCard credit cards contained a chip as of July, representing a more than two-fold increase since October when retailers rather than banks began to foot the bill for card fraud at the counter if they didn’t support chip and PIN.

However, as elsewhere, EMV adoption in the US hasn’t been quick or smooth. While merchants need to support the technology at terminals, banks also needed to issue cards with chips, and consumers were expected to see the security benefits of switching from a familiar swipe and signature process to inserting a card to a reader and punching in a memorised PIN.

The wide availability of chip-enabled cards suggests part of the challenge has been solved, but according to MasterCard, just 33 percent of retailers, equivalent to two million outlets, now accept chip and PIN cards. Still, this marks a 468 percent increase in supported terminals during the the period.

Major US payment networks including MasterCard, Visa and American Express kicked off “liability shifts” in the US on October 2015 under a plan that was announced in the wake of the massive 2013 payment card breach at US retailer Target.

As with EMV rollouts in Europe and Australia, the US experience hasn’t been smooth or simple. Consumers have struggled to move from signatures to PINs amid complaints that transactions take longer under the PIN system. Also, merchants have pushed back against the liability shift. Retail behemoths Walmart and Home Depot recently filed separate lawsuits against Visa and MasterCard over EMV.

Despite this, MasterCard says that chip and PIN is helping combat fraud. In August, it reported its top five merchants that support EMV had seen a reduction in counterfeit card fraud of 60 percent.

“This country is one of the most complex markets in the world so we know things won’t change overnight,” Craig Vosburg, president of North America for Mastercard, said in a statement on Monday.

“We’re encouraged by the significant progress over the last 11 months. With every additional chip transaction we move closer and closer to our collective goal – moving fraud out of the system.”