While Twitter is making some efforts to thwart ISIS recruiting, fundraising, and planning efforts, there is still much more to be done. 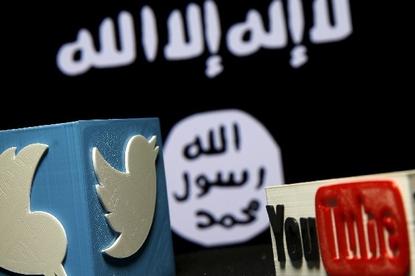 A 3D plastic representation of the Twitter and Youtube logo is seen in front of a displayed ISIS flag in this photo illustration in Zenica, Bosnia and Herzegovina. Credit: REUTERS/Dado Ruvic

The recent announcement that Twitter has taken down 125,000 counts in the last six or so months sounded like they are making substantial gains in stopping ISIS recruitment, fundraising, and planning efforts. That gives people faith that the Internet community is doing its part in protecting the nation and the world.

It is however curious as to why Twitter decided to make this random announcement given the timing of a lawsuit filed against them, three weeks prior, by Tamara Fields, the widow of Lloyd Fields Jr., who was killed in an ISIS attack. The suit contends that Twitter gave ISIS an unfettered platform to grow their terrorist network and plan attacks for several years. The lawsuit contends that Twitter violated the Anti-Terrorism Act, by providing significant support to ISIS.

We previously interviewed Wauchula Ghost, the spokesperson for GhostSec, for The Irari Report. In response to the Fields lawsuit and Twitter’s latest actions, he insisted that Twitter needs to step up the pace, if they want to do anything significant to stop ISIS’ use of their service.

He claims that GhostSec, other Anonymous supporters, and random citizens are reporting thousands of accounts, and Twitter has not been responding fast enough. There is also an apparent disconnect in how people are reporting accounts. Anti-ISIS activists are creating lists of accounts, and attempting to submit the lists to Twitter. However Twitter will apparently only investigate an account, if you go to the account on Twitter, and report that account individually through the site reporting feature.

While the lawsuit against Twitter is likely to fail, it does highlight the need to consider how Twitter and other social networks are policing themselves. Most social networks claim that they qualify as a publisher under the Communications Decency Act, so any efforts they put into removing ISIS accounts from their network is purely voluntary.

Ideally though, Twitter and other social networks will stop putting out press releases after they get sued, and proactively taking actions that significantly hamper terrorist actions.