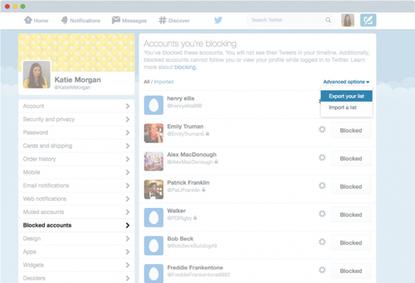 With the changes, users can save an exported file of the accounts they block to share with others. Users can import a list of the blocked accounts so they can block them all at once, rather than blocking the accounts individually.

Twitter, in a blog post, said it hopes the tool will help people on the site who face similar problems or who experience high volumes of unwanted interactions.

Twitter has been criticized for not doing enough to combat harassment on its site. Over the past year, the company has been expanding its abuse reporting tools, and adjusting its policies to ban certain types of content, like nude images posted without the subject's consent.

The new blocking tool will roll out starting Wednesday to some users of Twitter on the desktop, with availability expanding in the coming weeks. Users can access it from their blocked account settings.

The company said it was working on developing additional user controls targeting abuse.