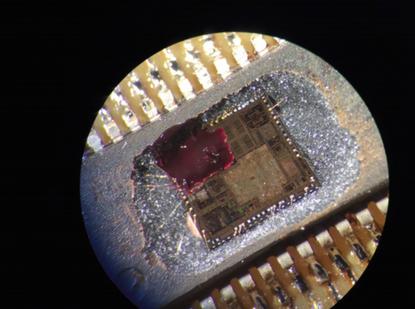 A photo of the embedded microchip inside a CyberLock.

The maker of a widely used electronic lock has taken issue with a security company's criticism of one of its flagship products.

CyberLock, which received advance notice of the problems from IOActive, contends it wasn't given enough time or information prior to IOActive's warning. Mike Davis, the IOActive researcher who found the problems, published two letters said to have been sent by CyberLock's lawyers to IOActive.

It remains unclear if CyberLock plans to file a lawsuit against IOActive. Neither company could be immediately reached late Tuesday.

Davis analyzed CyberLock's product, which blends a physical lock with electronic access controls. A CyberLock contains an embedded microchip that determines whether a special battery-powered key is authorized to open it. A key can be programmed to only open the lock between certain hours and can also be entirely revoked.

The locks are used by a number of large customers, including Amsterdam's public transportation system, Metro; New Zealand Post and Cleveland's Transit Authority, according to the company's website.

"After some reverse engineering, it appears that these devices are easily cloned, and new keys can be created from lost cylinders and keys regardless of the permissions granted to the key" Davis wrote. "Additionally, time-of-day restrictions are enforced by the key, not the cylinder, allowing an attacker access at any time regardless of the configuration."

IOActive found it could extract a key from the lock's firmware and create a cloned key by intercepting communications between a previously authorized key and a lock. The key is stored in clear text within a CyberLock, the company wrote.

In a letter dated Monday, CyberLock's attorney contended IOActive used sophisticated lab equipment and technical expertise that would not be available to the general public to arrive at its findings. CyberLock argued it might be easier just to drill the lock off the door or chop it down with an axe.

The company also contends it hasn't been give full technical information, and that IOActive proceeded to publish the advisory after giving its technical staff little notice.

IOActive's tactics -- to threaten disclosure unless technical staff is made available within a matter of days -- "is simply making this process more difficult for all of us," CyberLock's letter alleged.