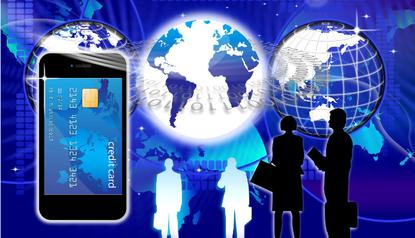 Almost every new product or service announced by Apple on 9 September at the Flint Center had been leaked at some point. Rumours that Apple was planning to move into the payments business proved correct when Tim Cook's team brought forth Apple Pay.

What is Apple Pay?

Apple Pay is a digital wallet. It uses two technologies or apps that have been part of iOS for some time - Passbook and TouchID. It also uses the established NFC standard for sending data and a new chip called Secure Element that stores payment information securely using encryption.

Passbook is a storage application that can be used to hold different sorts of cards and tickets. For example, many stores in the US make their loyalty cards available through Passbook and airlines send boarding passes to the app.

TouchID is the biometric security service that uses a fingerprint to either unlock the iPhone or can be used in place of a password when making purchases from iTunes. Until now, its use has been quite limited.

Apple is probably the last major smartphone maker to include NFC in its hardware. NFC is a very short-range radio transmission that allows communications of data between two objects that are either touching or in very close proximity. It's used in credit cards and other smartcards.

How will it work?

First thing - you'll need one of Apple's new iPhones - either the iPhone 6 or the gargantuan iPhone 6Plus. While the iPhone 5s can handle the TouchID it lacks the NFC radio and Secure Element chip.

Apple has done deals with American Express, Visa and MasterCard so that cards issued by US banks including Bank of America, Capital One Bank, Chase, Citi and Wells Fargo can be used.

When you have a supported credit card, you'll simply take a photo of that card and store the image in Passbook. Or you can use the card associated with your iTunes account.

For cards that are photographed, Apple validates that the data on the card is correct and yours with the issuing bank before adding it to Passbook. Once the validation is complete, the credit card information is not stored on the iPhone. Instead, a device specific identifier, stored in the Secure Element chip is used for future transactions. The credit card number does not even go to merchants.

With Apple Pay, you choose the credit card you want to use from Passbook, tap on a point of sale terminal and authorize the use with TouchID. It's important to note that Apple Pay isn’t only for in-store purchases. Apple is making an API available so that shopping apps will be able to use the secure payments system.

Will it be safe?

There is no such thing as 100% infallible security. Security is always about mitigating risks.

The current credit card and payments system has many security holes.

Magnetic strips can be read with card skimmers. Anyone who sees your credit card can potentially remember your name, the number, expiry date and three-digit security code.

With Apple Pay, note of those details are shared as you don’t hand a credit card over to someone.

Apple's approach is to use Touch ID and their the Secure Element chip to secure transactions. A dynamic security code is generated for each transaction, replacing the static security code stored in the magnetic strip on the back of your credit card.

These are important changes to the status quo.

Apple's Find My iPhone service can be used if a phone is lost or stolen to quickly suspend payments from that device. As the credit card number isn’t actually stored on the device, the need to cancel the card is also negated.

Apple Pay is highly dependent on TouchID. If someone has access to your iPhone 6 or iPhone 6Plus and has somehow compromised TouchID then they will have access to your credit cards to make payments.

A little over a year ago,TouchID was hacked. But it was not easy.

We suspect Apple has waited this long to use TouchID outside its own iTunes walled garden in order to be confident in the secureness of TouchID.

Eddy Cue's presentation at the iPhone launch was very US-focussed. It's worth noting that contactless payments are far more common in Australia. However, the need to carry credit cards around will diminish for those who buy a new iPhone 6 or iPhone 6Plus and use Apple Pay. While local banks have signaled their intention to work with Apple, there's no definitive word yet on when Apple Pay will available to Australian users.

Apple Pay, based on the evidence presented thus far, looks to be a more convenient and secure payments system than we currently have. It's certainly more efficient than the systems used widely in the United States.

From that perspective, it is a solution.