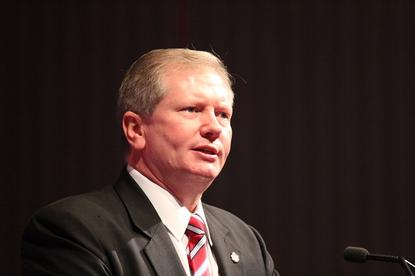 Australians will continue to be the target of ATM skimming by international crime syndicates unless banks fast track the rollout of ATM chip technology, said Queensland Police Detective Superintendent Brian Hay at the AusCERT event on the Gold Coast.

Australian ATM machines currently read magnetic stripe data contained in credit and debit cards for financial transactions, which means many customers are vulnerable to overseas criminals who find they can easily exploit the technology.

Skimming attacks are still successful in Australia since most banks have not yet fully implemented an upgraded security system called Europay, MasterCard, Visa (EMV). EMV debit and credit cards have a microchip that facilitates a cryptographic transaction that so far has not been defeated by criminals.

“We have seen chips installed on plastic cards but I understand the banks’ time table for putting chips into ATMs is not for some years,” Hay said. “I hope that they review that decision because we could benefit from it.”

“One of the issues is that organised crime tends to take the path of least resistance and this [ATM skimming] is the easiest path for them.”

ATM fraud refunds may not come quickly, if at all

One technology which has been changed in response to Romanian attacks has been point of sale (POS) technology used by Australian retailers.

According to Romanian police, the stolen data was either sold on underground websites or used to create counterfeit payment cards. It's estimated that the criminal operation resulted in fraudulent transactions totalling over US$25 million being performed with 500,000 payment cards.

It was later revealed that the companies targeted by the Romanian gang were mainly from Australia.

He added that the AFP, working with Romanian police, made a “significant” impact on this particular Romanian syndicate.