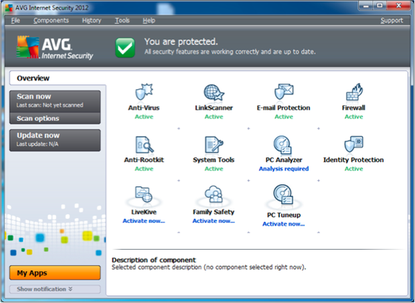 As AVG Ambassador Tony Anscombe explained the rational behind some of the new features in AVG Internet Security 2012, released today, I couldn't help but think of the bouncer at one of my favourite local pubs.

An enormous but quietly-spoken Islander, he keeps an eye open for any and every little situation that could potentially turn nasty. When something does turn, he acts swiftly and with minimal disturbance to the patrons.

But he also keeps an eye open for things that don't hold the potential for violence, but are "merely" risks to comfort or safety. While patrolling the bar, he clears glasses from shelves from where they might fall. He pushes an awkwardly-placed backpack further under a table so no-one will trip.

It's an attitude that takes this bouncer's work well beyond perimeter or endpoint defnece.

People want it to be simpler. So AVG has simplified the main screen, hiding lesser-used options and incorporating their three add-on products: LiveKive online backups, Family Safety and PC Tuneup.

People are also afraid that AV will slow their computer, according to AVG's research. So AVG reworked the timing and scope of scans, reduced the number of running processes from 16 to 11, improved boot time and reduced memory usage by a claimed 20 percent -- a figure to confirmed by independent testing.

But AVG went further. While it's down in the bowels of the computer, AVG 2012 cleans up some mess.

"What we want to do is better the experience of somebody using their machine. Give them the speed back, so their experience of the internet is slick and fast," Anscombe said.

AVG Accelerator, which optimises the computer's internet connection, is claimed to cut download times for YouTube videos and Download.com files by up to half -- again the figure is to be confirmed. "It won't make much difference for a 10-second video clip," Anscombe said. But for anything bigger than 8 or 10MB users should see a "significant performance difference".

Anscombe wouldn't be drawn on how this is done. "I'm not allowed to get into it because it's proprietary to us," he said.

AVG Advisor resulted from a study of user behaviour that revealed some applications needed management to speed them up. Web browsers were an obvious first candidate, Memory leaks in browsers open for many hours cause significant slowdowns.

AVG Advisor monitors browser activity -- currently only Google Chrome, Mozilla Firefox and Microsoft Internet Explorer are supported -- and pops up a window to tell you when it's time to restart the browser for a "significant" speed increase.

This make-the-experience-better approach means that AVG 2012 defends against both halves of Anscombe's taxonomy of fake anti-virus (Fake-AV) software, "Fake-AV that delivers a Trojan or malware, and Fake-AV that takes $20 off you."

"Now the Trojan or malware version, we block it anyway because it's got malware in it. It's the other one, it's not strictly doing anything wrong other than fraudulently taking money off the person." From a traditional AV viewpoint it's doing the right thing, delivering harmless, well-formed HTML to the web browser for display on screen.

"We've built some patent-pending technology that looks at what's being messaged to the user and whether we think it's Fake-AV," Anscombe said. It looks at what the software is telling the user it's doing, for example, and compares that with the actual activity on the machine.

"This to me is taking us another layer out of the AV thing, because this is not AV. This is actually now protecting the user against a scam that's happening on the internet," he said. "So again we're trying to keep them safe, and kept their enjoyment of the internet good."