Establish trust first then follow directions over the phone 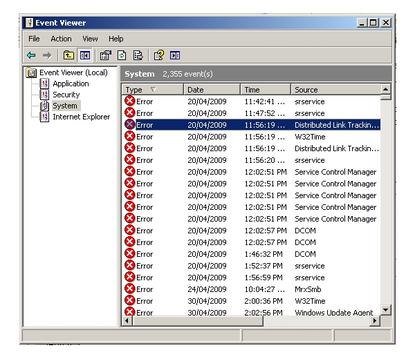 Windows Event Viewer (eventvwr): many error messages may be used to mislead people

What do you get when you combine malware, IP telephony and an offshore call centre? A new breed of brazen phishing scam designed to target unwary Windows users.

Many computer users are still being swindled by elaborate fake emails from scammers pretending to be their online banking service but new, more personal, attacks now require people to screen phone calls as well.

2011: update Microsoft at a loss over Event Viewer scam

The scam involves a random telephone call made to an Australian number from an offshore call centre.

A computer is used to do predictive dialing and connect the call, which is characterised by a delay of a few seconds before the other person answers.

The caller then claims to be a representative of a software company and requests the recipient to run a program to fix 'bugs' in the operating system.

While the use of voice technology to facilitate a social engineering scam is not new (VoIP and PABX software can be set up to 'sound like' another organisation), this level of sophistication involving a human at the other end of the line only came to prominence in Australia this year.

A Sydney-based marketing professional, who requested anonymity, reported to Computerworld one attempt that occurred last week.

“I received an interesting telephone call received at 4pm on Saturday,” she said.

“It was a dodgy call to my home telephone that sounded like it was from India. The woman caller, Sam, claimed to be a representative from Microsoft, calling as she knew I had a Microsoft operating system (funny that) on my PC.”

After 'playing with her' on the phone for about seven minutes, Sam asked the person to run scripts on the PC and wanted to talk through a process to see if there were any 'bugs' in the computer.

If any were found a 'technician' was apparently going to fix them.

“After a convoluted way around things she asked me to start Windows’ Run and enter the command 'eventvwr' [Windows’ Event Viewer] in the run box. I didn't and I tried to get her to explain the next steps and asked her if she wanted my IP address, she said no and was again prompting me to enter the text.”

Event Viewer maintains logs about program, security and system events on Windows and, according to Microsoft, can be used to view and manage the event logs, gather information about hardware and software problems, and monitor Windows security events.

Event Viewer system logs display prominent 'Error' icons, which often relate to trivial matters like the failure of a process to start, but could be used by a scammer to convince someone their computer needs 'fixing' by running a script.

“It’s a problem for the user and compounded by blocked caller IDs,” Wesley said. “If you can’t call back on a recognised number don’t divulge any personal information.”

Wesley said people should always make sure they are in contact with a representative from a trusted number.

“It’s a question of how do you trust the other person on the phone? There are ways to contact Microsoft in a trusted way. If you ask the person calling you for a number to call back on then you have improved the situation to authenticate them over the phone.”

Wesley said calling someone yourself is a much better way of establishing trust.

“Users need to know who they are getting advice from,” he said. “When someone calls you from an unlisted number the trust is not there.”

As for the Sydney-based marketing professional, she didn’t fall for it and told the caller she was “on to her scam and that she was a bad lady!”.