Drive imaging is one of those essential tools that is simple in principle yet can be complex in implementation.

Do you need a whole drive image, or just a partition? Can the images be encrypted for security, and to what level? Can they be compressed, and how demanding is the compression? Can images be saved to or restored from network resources easily? Can files be extracted directly from an image? Does it come with a command-line counterpart for unattended use? Is the image format an open standard? Does it come with support? And does the tool come with its own bootable image to provide OS agnosticism?

Then, of course, there's ease of use. Some tools have excellent interfaces, while others have a more questionable design. And while good imaging software isn't something you want to skimp on in your budget, there are in fact some good free tools available as well. Though it is, as usual, often a case of you get what you pay for with the more expensive products offering extended flexibility and features.

Traditionally, disk imaging is a critical component of backup and recovery as well as means for mass deployment of a standard operating environment (SOE) -- making it a simple affair to provision a system for a new user, or mass-update a range of computers across a network.

But they are also useful when upgrading a system's hardware while preserving the original software configuration (with some driver tweaks as necessary), for migrating a system to a virtual host (be it a locally hosted VM or in the cloud), and importantly to restore or preserve a system snapshot for forensic use: imaging a compromised system provides for later analysis to determine the point of entry and the extent of a breach, while restoring after a breach from a known-good state ensures a return to operation without risk of secondary breaches from a compromised system.

So for many reasons disk imaging is an important tool in the IT department's arsenal, so here's our selection of popular and effective drive imaging tools to help keep your operating systems and data safe. 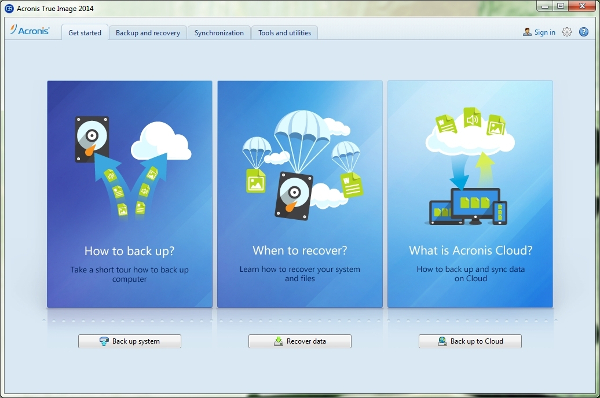 Acronis True Image has a number of unique advantages including its own cloud service and iOS and Android support.

Acronis True Image has made a name for itself as a popular backup tool, but the latest version adds disk imaging support including backing up an image to its own cloud service. In addition to this the standard backup features include automated and scheduled backups, incremental and differential support to save time and resources, and the Time Explorer (similar to Windows 8's own File History) to browse through past backups and restore files from a point in time.

Data and images can be stored locally, across a network or the internet (FTP support is provided), or in the cloud while 256-bit AES private-key encryption ensures data remains secured (particularly if you're worried about possible breaches to the cloud service). As private-key encryption, only you can decrypt an image, Acronis would be unable to get you back into your data and this is a good thing from a security perspective if you worry about breaches in the cloud.

Restoration options include the ability to restore individual files, including directly from cloud backups, and to access files via a web browser or from a free iOS and Android app in addition to the program itself. In order to restore to bare metal machines bootable media (i.e, a USB key or CD/DVD-R) can be created with the Acronis Media Builder. This is a Linux-based bootable environment with a portable version of Acronis True Image to create backups and restore, though with some limitations compared to the Windows desktop tool.

The Premium version includes Windows PE support, restoration to different hardware than the source machine (making it ideal for image deployment), and the ability to restore to and backup Windows' dynamic disks. Beyond this the Acronis Backup and Backup Advanced products for enterprise contain all of these features plus more such as performance management and data de-duplication, with price scaling depending on the features you need.

True Image comes with 5GB free cloud storage with either of its True Image 2014 or True Image 2014 Premium products, but this is upgradeable to up to 500GB depending on monthly plan when purchasing. Acronis Backup and Backup Advanced start at 500GB and scale to 3TB in the cloud.

As the only product in our round-up to offer cloud storage this certainly sets it apart, however even without this service it's also one of the more expensive offerings for both the True Image and Acronis Backup product range. 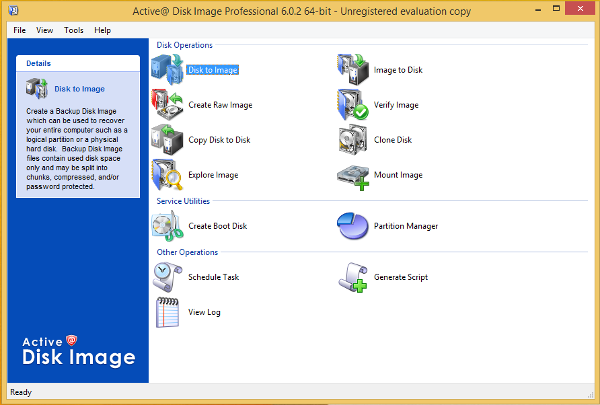 Not quite as fully featured as some of the other products in our round-up, but it has the essentials.

Innocuous use of the 'at' symbol aside, Active@'s Disk Image is a no-nonsense and compact program that encompasses all the essential features, much like its compatriots covered here. These include optional 256-bit encryption, multiple levels of compression, image splitting, smart copying or full sector-by-sector mode, incremental and differential support, dynamic disk support, email notifications for successful or failed tasks, automated scheduling and disk cloning.

It also allows you to set up a batch of imaging tasks, and to save these as a script for unattended operation, which is a nice touch.

The interface is clean and simple and perhaps a little better laid out than others we looked at here, and includes access to a 'Partition Manager' though this simply launches Windows' own Disk Management Console. In terms of networking there are no special provisions -- if Windows can see a share, Disk Image can save to it. It does, however, include an effective image browser that lets you explore and restore individual files as required.

Boot disk support comes in Windows PE form only, but provides the full functionality of Disk Image to create system images of Windows, Linux or MacOS systems in full sector copy mode or to restore images to bare metal machines. Speaking of which, aside from restoring an image or cloning a disk, Disk Image will also let you simply copy part or all of whole disks to another disk, resizing partitions on the fly.

The Professional version has the most features comparable to the other products here, but it still lacks the depth of configurability we see from the other tools. Seat licenses are available for business use and these are competitively priced to the other programs we've looked at here.

On the whole Active@ Disk Image isn't quite as flashy or feature rich as some of the other products, but it has the essentials and a no-mess interface that's easy to use and gets the job done.