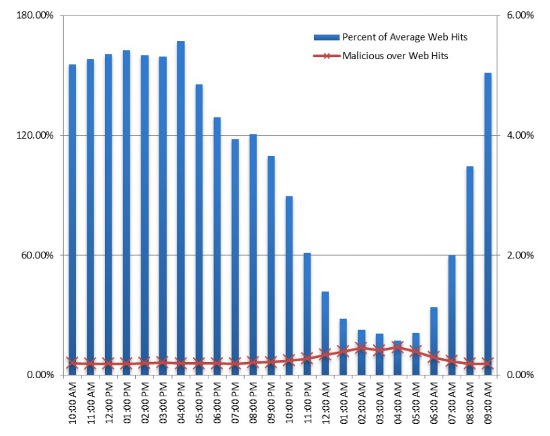 Business users account for 57 per cent of malicious attacks while one in eight Australian IP addresses is hit by one or more Web attacks on any typical day, according to a Deakin and Macquarie University analysis of more than 200 million Web requests from Australian Internet users.

The report – entitled Analysis of the Australian Web Threat Landscape and conducted by Deakin and Macquarie academics with the support of security vendor Trend Micro – reflects research that began earlier this year and has since used data analysis on a wealth of data provided on an opt-in basis by users of Trend Micro’s cloud-based security filtering services.

The Australian Research Council-funded research is based on data collected during the first two weeks of May, during which devices representing 600,000 distinct IP addresses visited HTTP/HTTPS sites every day. Of 200 million requests analysed during the time, just 400,000 – from around 80,000 distinct IPs – were issued for access to malicious Web pages.

Users of Trend Micro’s business products triggered 57 per cent of malicious traffic requests, while users of consumer products accounted for just 41 per cent.

Just 2 per cent of malicious websites visited by Australian users were actually hosted in Australia, while 62 per cent originated in the United States – lending support to earlier reports that notorious malware host China was actually losing its one-time dominance. Ninth-ranked China actually represented fewer hosts than Australia, which was the seventh-most common malicious target.

The project “allows us to apply large scale analytics techniques to analyse massive volumes of Trend Micro malware sensor data,” said Professor Yang Xiang, director of the Network Security and Computing Lab within the Deakin University School of Information Technology, in a statement. “Though Australia is geographically isolated in the Southern Hemisphere, it is attracting a significant volume of web threats.”

The researchers singled out activity by the Kelihos worm, which played on interest in the Boston Marathon bombings to lure 2429 Australians to sites infected with malware. Australia ranked 14th in terms of the countries affected by the worm, with the United States, Germany, Japan, South Korea, and Taiwan most affected.

Interestingly, many of the hosts were unaware of their infection with malware: of 24 servers compromised by the Blackhole Exploit Kit and noted by the research team, 12 were still delivering the malware-compromised pages a week later.